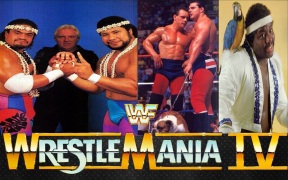 For today’s Countdown To WrestleMania 33 match, we are going into the tag team division as we time travel to 1988 for WrestleMania IV which was the first to be held in Atlantic City thanks to the current President of the United States Donald Trump. So many people know the world famous Samoan super family The Anoa’i Family thanks to wrestlers like Rikishi, Yokozuna, The Rock, Roman Reigns, Umaga, The USOS, The Headshrinkers, and the Wild Samoans (The Patriarchs). Every one though seems to forget that there was another member fo the family that wrestled back in the day who is also the twin brother of Rikishi in Sam Fatu a.k.a. Tama (at least at WrestleMania IV) while as a member of the Islanders with Haku. At WrestleMania IV, The Islanders would team with their manager Bobby “The Brain” Heenan and they would take on The British Bulldogs (Davey Boy Smith and The Dynamite Kid) and Koko B. Ware. The match came about after The Islanders had kidnapped Matilda, the English Bulldog mascot during a match they were having. Heenan of course ran his mouth about having pet mascots at ringside and that got Koko B. Ware involved in the feud.

The Dynamite Kid didn’t waste anytime as he catapulted Tama into the ring with the ropes and began just decimating him with hip tosses and big chops. Kid would once again catapult him, but this time it was out of the ring. As soon as Tama went back in the ring, Davey Boy Smith would miss an elbow that allowed Tama to tag in the powerhouse Haku. Both men would test their strengths against each other, but Davey got the best of him first with a high crossbody. The match was just not going their way because anytime they would try to muster any offense, Davey was there to retake the momentum with his power moves like the military press slam. After taking a beating from all three men, Haku eventually gained the advantage with a high heel kick in the corner that took down the Dynamite Kid. Eventually Heenan would get the tag and he’d lay in some kicks to the Dynamite Kid, but as soon as there was trouble, Heenan quickly tagged out. Heenan would return to the ring, where he’d begin working in Koko with vicious kicks, btu at one point Heenan looked like he was in trouble. So much to the point that The Islanders came into the ring and assisted Heenan in pinning Koko B. Ware for the win. While you’re at it, don’t forget to like our page on Facebook at Facebook.com/MRXPUNCHOUT and follow us on Twitter too.