So technically WrestleMania 33 has not happened until later today so I can’t chose a match from that one to review. So as per custom I get to choose any match from any WrestleMania that I want to and the one that I chose has a lot to do with a couple of wrestlers. One is that I chose this particular match from WrestleMania 31 because it features one of my personal favorites in Bray Wyatt who is currently the WWE Champion heading into WrestleMania 33. The other reason is that the match featured him taking on The Undertaker who could possibly be wrestling his very last match ever in the WWE if the rumors are true against Roman Reigns. The Undertaker was fresh off of losing his unbelievable streak against Brock Lesnar at the previous WrestleMania so the questions heading into this one was what kind of shape was he going to be in and was he passing the torch to “The New Face Of Fear” Bray Wyatt? Bray was trying to sych himself up when he was face to face with the deadman, but The Undertaker got things started with a big boot. The Undertaker started the match by dominating it, bringing the pain to Bray. 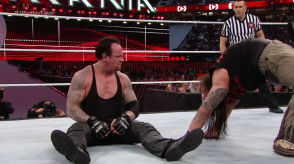 After a little bit of a flurry from the deadman that included Old School and an attempt at Snake eyes that was quickly cut off with a unique crossbody from Bray placed him in firm control of the match. Bray dominated the match for a bit in a match that moved at a very slow pace due to an ankle injury that Bray had suffered that day during rehearsals. After sacrificing his body on the outside, his ankle began to act up on him allowing the deadman to recoup a little bit in the ring to the point that when Bray approached him, he placed him in hell’s gate. Bray would eventually break out of the hold and he would continue his dominance with some high impact maneuvers and a running senton. After mocking The Undertaker while attempting the Sister Abigail, the deadman countered by grabbing him by the throat. He would chokeslam Bray and even deliver a tombstone piledriver, but Bray shockingly kicked out during the pin attempt. The Undertaker would signal for the tombstone, but when he went to deliver it, Bray somehow countered it right into a Sister Abigail. Unfortunately for him, The Undertaker would kick out at two leaving Bray shocked and dumbfounded. The two would trade right and lefts before Bray set him for another Sister Abigail, but the deadman was able to counter it into a tombstone and that was all she wrote for Bray Wyatt.