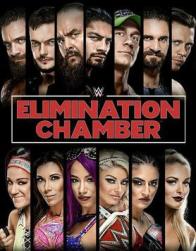 I am pretty sure that I have described all the things that were wrong about the WWE bringing back the Elimination Chamber match last year. In fact, you can check out all the injuries that have happened in this article. It is one of the most devilish matches in the WWE that can be very entertaining to fans everywhere, but the physical toll it takes is always the question. I know at last years Elimination Chamber, it looked like the WWE took as many measures as they possibly could to make the match safer which was appreciated by a lot of us. I never want to see a wrestler suffer an injury that he can not come back from no matter who he is. With that said, I am little worried heading into tonight’s event which emanates from the T-Mobile Arena in Paradise, Nevada. I say that because tonight will feature the first ever Women’s Elimination Chamber match that sees Alexa Bliss put her WWE Raw Women’s Championship against Mandy Rose, Bayley, Mickie James, Sasha Banks, and Sonya Deville. While I am excited that the women’s division continues to make history with every PPV that comes and goes, but I am worried about injuries. 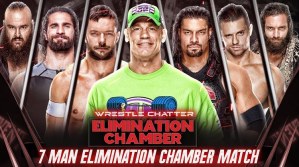 The men will also make history tonight (well sorta) when seven instead of six men enter the chamber tonight to see who will earn a shot at the WWE Universal Champion Brock Lesnar at WrestleMania 34. Braun Strowman, John Cena, Seth Rollins, Finn Balor, Elias Sampson, The Miz, and Roman Reigns will battle for the chance. Now the way they are doing it is that three men instead of two will start the match with another entering after five minutes. Now, let’s be honest with each other, while I would love to see Braun Strowman get his legitimate shot at Brock, you know the WWE still has a hard on for Roman Reigns. Rumor has it that John Cena will be facing The Undertaker at WrestleMania 34 while Braun will be involved in something stupid. So, it almost seems like a nightmare come true for fans of Wrestling that Roman is going to be headlining WrestleMania for the fourth year in a row. Here’s another fact to look at while you watch tonight: last year at this time, Bray Wyatt won the Elimination Chamber match to become WWE Champion. So what has happened to the man since then?

One of the best characters to come into this new era of wrestling continues to be disrespected even though we did want to see him face “Woken” Matt Hardy. He seems to be the stepping stone for every wrestler on the roster and that is disheartening. While, I think the tag team division needs to continue to grow, I think I would be OK with Titus Worldwide winning a little gold even though I won’t think it’ll happen tonight. Nia Jax is fighting Asuka tonight for the chance to be included in the WrestleMania 34 match, but I don’t think the WWE is ready for Asuka to lose sadly. Although, I will say that a one on one match between Asuka and Alexa Bliss will be one for the ages even though it should have been Paige in this picture. Sadly, The Good Brothers have been relegated to the Pre-show along with the Miztourage, but that is life in the WWE I suppose. This is a chance for the WWE to pave the way to WrestleMania and beyond so they have to make logical choices, but that remains to be seen. We also have the contract signing to look forward to tonight for Ronda Rousey, but we all know that Stephanie McMahon is going to make this one personal. Here are my predictions for tonight:

The Good Brothers will defeat The Miztourage