As the WWE rolls into the Allstate Arena in Chicago for the Ninth annual Money In The Bank PPV, here are some of the things you can expect to happen tonight. As awesome as it sounds to have a match between Nia Jax and Ronda Rousey, we all know that Ronda is not walking out of Chicago with the title. I also do not think that she is necessarily going to lose either, but I do think that there is going to be outside interference that will put an end to the match. It is still too early in her career for her to be crowned a champion and I feel like the WWE is still just getting started on Nia’s dominant run as WWE Raw Women’s Champion. I am hoping that tonight is the last that we are going to see of Shinsuke Nakamura challenging AJ Styles for the WWE Championship. I am hoping that the WWE has come to it’s senses and that they have finally decided what they are going to do with the belt. I mean what are you going to do with it? Are you going to have AJ retain somehow? Or are you going to finally put the strap behind Shinsuke who will honestly do better with it than Jinder Mahal.

I Honestly do not see Carmella walking out of MITB with the WWE Smackdown Women’s Championship. I get that she cashed in and was able to win the title that way, but I do not see her handing Asuka a loss on her record. I honestly think her championship run ends tonight and let the dominance begin. As much as most of the wrestling world hates Roman Reigns and as much of the reports we hear that maybe Vince has woken up like Matt Hardy, I still think Vince is big on Roman and he’s walking out with a win. Sami Zayn has to be on someone’s shit list because as much as I’d love to see him beat Bobby Lashley, it’s not going to happen despite his poor mic skills. I am having a hard time deciding who I want to win the IC Match because while I like Elias, I am still a huge fan of Seth’s and he is making the IC belt legitimate. That is the only reason why I see Seth walking out as IC Champion, sorry Elias. I don’t understand the point of having this rivalry between Big Cass and Daniel Bryan only because there are better opponents for Daniel on this dream run. 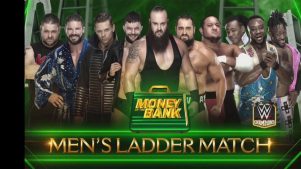 The only thing left to be talking about are the two Money In The Bank ladder matches for the men and the women. In the men’s match, we have Finn Balor, The Miz, Rusev, Braun Strowman, Bobby Roode, Kevin Owens, and a member of New Day to be decided at the event. In reality, I’d love it to be Big E Langston in the match, but Kofi would be cool to see as well. The only person I would want to see win this match is Braun Strowman, but there is a very good chance that it’s Finn Balor that walks out with the briefcase. I just feel that he is destined to have another shot at the WWE Universal Championship. The women’s match features Charlotte, Alexa Bliss, Becky Lynch, Ember Moon, Lana, Natalya, Sasha Banks, and Naomi. I don’t understand how there is no one from the Riot Squad or what was left of Absolution in this match, but instead we have the old order and one newbie in Ember Moon. The WWE gave Carmella the briefcase twice last year so do not be surprised if Lana somehow pulls this off, but I am routing for Ember Moon to win the match. Check out my predictions below:

The Bludgeon Brothers over Gallows & Anderson

Ronda over Nia by DQ