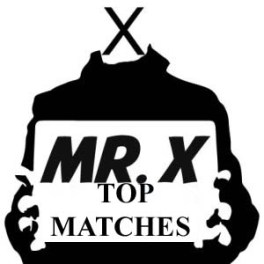 As I have said many many times and I’ll say it again there is an abundance of wrestling at our disposal that it’s almost a dream come true because I remember being a teenager and wanting more wrestling than just the WWE and WCW because they were only on certain nights of the week. Now, we live in a world where you are getting WWE’s programming (RAW, Smackdown Live, 205 Live, NXT, NXT UK plus PPV’s when applicable), Impact Wrestling (free on Twitch), and so much independent wrestling whether it be Ring Of Honor TV on Fite, or all the various independent promotions that are on Independent Wrestling TV like Beyond Wrestling and ICW New York to name a few. Now, we are in the midst of a revolution in wrestling especially since AEW debuted with Double Or Nothing and with the fact that they have a weekly show coming in September. So with all this wrestling going on, I am once again here to present to you guys what I consider to be the top matches of the week from all the promotions that I have watched. If there is any match I may have missed and you think I should check it out then tweet me @EddieValiant82 on Twitter. Here are the matches that I believe you should check out, but to hear what my match of the week was, you’ll have to tune into my podcast Five Star Wrestling Podcast to find out when we read our five star moments/match of the week. 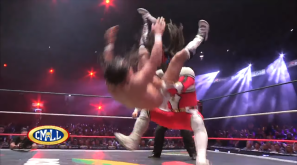 Jushin is one of the most legendary wrestlers to ever come out of Japan in my opinion and the man is currently on his retirement tour and he made a stop at CMLL in Arena Mexico for a match with Negro Casas, Ultimo Guerrero, and Caristico (the original Sin Cara) in a one fall match. At first it was looking like a tag team match as Ultimo Guerrero dominated the ring against Caristico and occasionally Negro Casas would help him out. It was until Jushin made his way into the ring that it was clear that it was supposed to be a fatal four way. Eventually at one point, it looked like Ultimo Guerrero had Caristico in the corner, but whenhe launched himself, Caristico moved out of the way just in time sending Guerrero to the outside. Right after this Caristico launched himself from inside the ring over the turnbuckle and onto Ultimo Guerrero with a huge cross body, but it took the both of them out of the match. Jushin took advantage by hitting Negro Casas with a kick to the stomach and he followed it up with a powerbomb which was enough for the 1-2-3 and the win. 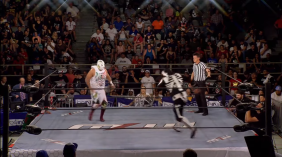 You want to talk about two of the biggest names in the world of Mexican Lucha Libre then there are none bigger than the Los Parks (LA Park & El Hijo de La Park) and The Wagners (Dr. Wagner Jr. & El Hijo de Dr. Wagner Jr.). Well that clash of families took place once again, but this time in a MLW ring as the two battled. The match was dominated by The Wagners in the beginning as they proved that there is no tighter bond than that of father and son. Eventually the Los Parks would have their shot at dominating the match proving that they can work just as well together. The rest of the match was an all out war as they literally threw everything they could at each other, but in the end one mistake proved fatal. LA Park was on the outside of the ring when Dr. Wagner Jr. hit him with a suicide dive that practically sent him into the front row. El Hijo de LA Park would then launch himself with a suicide dive of his own into Dr. Wagner Jr., but when Dr. Wagner Jr’s son tried to do the same thing, he went right into his own father knocking him right out of the match. El Hijo de LA Park would throw El Hijo de Dr. Wagner Jr. back into the ring where he was met with a spear from LA Park and that was all she wrote as they got the 1-2-3. 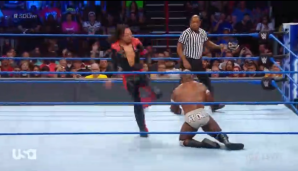 One guy that I am certainly happy to see getting some in ring time is Apollo Crews for sure as he is a very talented wrestler especially after his match last week with Kushida. While RAW Reunion was an absolute dud in matches, Smackdown definitely tried picking up the slack by having him face WWE Intercontinental Champion Shinsuke Nakamura. The match was pretty even for the most part as both men were showcasing what they had, but at one point it looked like Shinsuke was about to put Crews away for good with a Kinshasa, but Crews was able to stop him in his tracks with a kick and then n Olympic slam out of nowhere. Unfortunately for Crews, it wasn’t enough to put him away so he tried climbing the ropes, but Shinsuke was there to put a halt to that and it ultimately lead to a Kinshasa that connected and allowed Shinsuke to get the win. It was a very good outing for Apollo, but he unfortunately couldn’t get the W, but I hope this is the beginning of more to come from him. 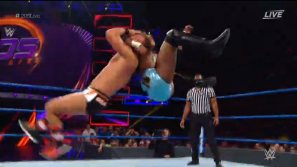 Drew Gulak was looking for anyone to come knocking on his door from any where in the company and someone answered in the form of NXT Newcomer Isaiah “Swerve” Scott. This was going to be an interesting match considering that Gulak had mentored him down in Evolve Wrestling for many years. One thing was for sure in the beginning of the match and that is Swerve was not scared or intimidated by Gulak as he matched him move for move and dare I say controlled most of the beginning of the match. It wasn’t until Scott injured his right hand hitting Gulak in the skull that the tide began to change and Gulak had more control as he tried to pick up the arm and hand of Scott. After dishing out some further punishment, Gulak slapped on the Gulak (a modified camel clutch) that was punishing Scott every second that he was in it, but some how Swerve made it to the bottom rope to break the hold. Swerve tried to muster up a flurry of offense, but in the end the hand came back to bite him when it counted and Gulak was able to hit the Cyclone clash to help secure him the 1-2-3 and the win. This is a match of the week contender right and I can’t wait to see more from Swerve in the future.

It’s the first match in the semifinals of the NXT Breakout Tournament and the match featured two of what I believe are the best left in the tournament as Jordan Myles took on Angel Garza. The match in the beginning looked like it was going to favor Jordan Myles until Garza pulled the ring apron out from under him, literally! It was such an awkward fall that you were left wondering what kind of condition was Myles going to be in for the rest of the match. Nevertheless, he never gave up and he kept moving forward eventually hitting Garza with a running discuss clothesline that allowed him to muster up some offense. After Garza missed Myles with a moonsault, he hit Garza with a series of moves that involved a kick to the head, a running discuss clothesline, and a huge German suplex into a pinning combination that Garza just couldn’t kick out of. Jordan was the big winner of the match and on his way to the finals.

In a record two minutes last week, “Red Death” Daniel Garcia shocked everyone when he pinned Discovery Gauntlet champ Christian Casanova, but this week he has a tougher challenge. Some time ago last year, Daniel Garcia and Kevin Blackwood were involved in a bad car accident that left the two in the hospital to recover. Now, the two are in the ring at the White Eagle Hall in Worcester, MA to do battle for the right to return the following week. These guys in the beginning of the match pulled out the big guns and they threw everything they had at each other, but neither would stay down or quit. I mean for most of the match, these guys were matching each other move for move like it was a give me your best shot contest. After several big time moves and kick outs, it looked like Kevin Blackwood was finally going to take this home as he started to slap on Just Like Heaven (STF), but he struggled to look in the final arm and Daniel Garcia took advantage and reversed it into a death shooter (Sharp Shooter). As soon as Daniel leaned all the way back, Kevin had no choice, but to tap out.

It was a rather slow week for wrestling in my opinion as far as great matches are concerned, but one match that deserves some mention is Leyla Hirsch vs Alex Reynolds from Beyond Wrestling’s 17TH episode of Uncharted Territory. Leyla fought her ass off in this match and proved that she has what it takes to hang with the boys. There was a match on Ring Of Honor TV this week that featured Dalton Castle, Jeff Cobb, Kenny King, and Jonathan Gresham and it was a pretty decent match. Lifeblood vs Villain Enterprises also deserves a mention from that night as well. If it hadn’t ended in a DQ for Davey Boy Smith Jr., his match with Alexander Hammerstone from this past week’s MLW Fusion would not be in this category.