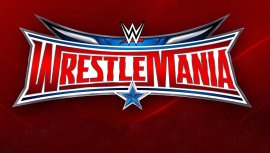 Everybody is probably wondering just what did I think of the 32ND edition of WrestleMania, the showcase of the immortals. I wanted to first start off by saying that this WrestleMania could have gone down as one of the worst in history, but I actually enjoyed watching it a lot. I didn’t like a lot of the results of the matches, but that’s simply how it goes in the sports entertainment business. Not everything goes your way and that was certainly the case with my predictions. For example, the ladder match that kicked off the night is definitely a contender for match of the night, but I absolutely hated the result. I would have rather seen The Miz win than Zack Ryder. Shane McMahon and The Undertaker had one hell of a match and I gained a lot of respect for Shane, but I hated the ending. I was ready for Shane to take over and start bringing the WWE in the right direction. I also didn’t understand the WWE having Jericho defeat AJ Styles, but it was a match that lacked excitement. I loved the fact that Baron Corbin won the Andre The Giant Memorial Battle Royal, it’s a nice way to transition him into the main roster. 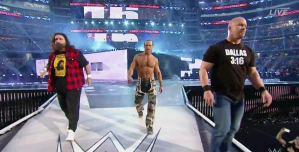 The best moment of the night came after a match I had no interest in which was The League Of Nations/New Day match. After the match was done, Shawn Michaels, Mick Foley, and Stone Cold Steve Austin came down to ringside and opened a huge can of whoop ass on the League Of Nations.The Rock’s segment which saw the return of John Cena was also a nice touch on the night. It was also cool to see Shaq compete in the battle royal even though we all know what happens to him. It also brought back memories to see Tatanka back in a WWE ring once again after so many years away from the company. As far as my predictions were concerned, I had a pretty horrible night as I finished 5-6 on the night. The match of the night award officially goes to The IC Title ladder match with both the Brock/Ambrose and Undertake/Shane match in a close second. I said that I predicted that I was going to give WrestleMania 32 an B+, but I am giving the event an A- for a final grade. It was definitely one heck of a night in the lone star state and one for the memory books.

The USOS def The Dudley Boyz

The League Of Nations def. The New Day 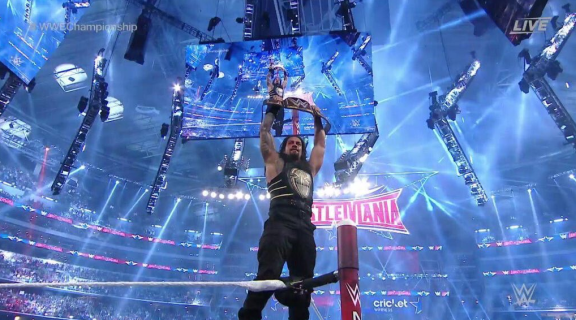 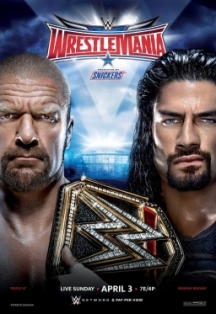 It is that time of the year once again when the show of shows commences in the showcase of the immortals. That’s right, I am talking about WrestleMania 32 which takes place live tonight from AT&T Stadium in Dallas, Texas. Its the Superbowl of the WWE and I am kind of excited for it because despite all of the injuries this could still be a good show. Out of the 11 matches that are taking place tonight, I am excited for about a little over half of them while the others I could personally do without. One of the matches that I think is just absolutely stupid is Ryback (Ryberg) taking on US Champion Kalisto. This is literally a math that no one cares about. The only thing I want to see happen in that match is for Goldberg to come out and spear Ryback to hell. Despite the fact that I love Paige and Emma, I really could care less for the The Total Divas Vs Team B.A.D. And Blonde match. It’s literally the Divas Jobbers match (essentially the old divas division no one wants mixed in with a few we still want). I love watching The USOS, but their match with The Dudley Boys is literally an attempt to put them over with the crowd since New Day stole their thunder. I am also very disappointed in the opponent choice for The New Day in the form of The League Of Nations (a group none of us care about). There are so many tag teams in the WWE that are better opponents than The League Of Nations. The last match that I don’t essentially care for because the WWE is going insane in trying to put Roman Reigns over with the crowd that it’s sickening. No mater what, the guy is leaving in a sea of boos.

Now to talk about the matches that I am looking forward to from the Wrestlemania 32 card like Brock Lesnar taking on Dean Ambrose in a no holds barred street fight. This match has me thinking that we could see a little of the attitude era tonight considering all the legends of those days that have already paid visits to Dean in the past weeks. Then there is the seven man ladder match for the Intercontinental title that could be a tradition now a WrestleMania, but if you ask me Owens has nothing to worry about. With four jobbers in the match, he only has two guys to worry about in Dolph Ziggler and Sami Zayn. Hopefully what is the last match in the series, we once again see AJ Styles take on Chris Jericho. With three amazing matches already in the books, how can they top the last three on the biggest stage. The Andre The Giant Memorial Battle Royal is  a cool match to have on the card, but who is going to win it? Rumors have it that Cesaro, John Cena, and Randy Orton are all there, but will one of them appear during the match? Charlotte once again defends her Divas title against Sasha Banks and Becky Lynch in a triple threat match and you know Ric Flair is going to play a part in this. The last match that I am super excited for is the Hell In A Cell Match that sees Shane McMahon fighting for not only his life, but for control of Monday Night Raw against The Undertaker. Is The Undertaker going to lie down for Shane or is someone going to interfere and cost the Deadman the match? I honestly thing this can be a decent night so I am predicting that the event’s final grade is going to be an B+. Here are my predictions for the night as far as matches are concerned.

The USOS defeat The Dudley Boys

The League Of Nations defeats The New Day 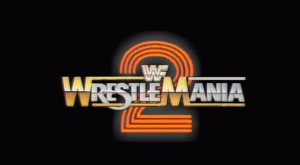 You may be asking yourself out of all the matches I could have picked for Day 2 of the countdown to Wrestlemania 31, why did I pick the NFL Vs WWF battle royal from Wrestlemania 2? It’s a very simple answer and that is because at last years Wrestlemania 30, they debuted the André the Giant Memorial Battle Royal and at Wrestlemania 2 the big man competed in this battle royal. The battle royal featured some big names from the NFL like Jimbo Covert, Ernie Holmes, Harvey Martin, Bill Fralic, Russ Francis, and the Fridge William Perry taking on WWF stars Bret Hart, Jim “The Anvil” Neidhart, Tony Atlas, Big John Studd, King Tonga, Jim Brunzell, Ted Arcidi, Dan Spivey, Hillbilly Jim, Pedro Morales, B. Brian Blair, The Iron Shiek, Bruno Sammartino, and the great, late André the Giant which emanated from the Rosemont Horizon in Chicago (which was 1 of 3 cities Wrestlemania 2 was broadcast from). 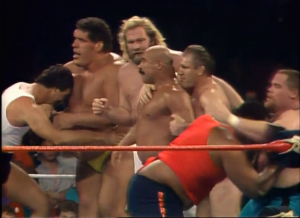 It was an all out melee in ring with over 20 men and some of them had to be well over 300 lbs as most of the WWF stars tried to eliminate the fridge first. At one point, the goofy Tony Atlas was eliminated by the Fridge. It was great to see the legend Bruno Sammartino eliminate The Iron Shiek in the battle royal. Big John Studd was able to eliminate the fridge, but he made the ultimate mistake in the match. Perry extended his hand as if to give a handshake and when Studd reached over for the shake, The Fridge pulled him out eliminating him leaving Jim Neidhart, Bret Hart, Russ Francis, and André the Giant left in the ring as the final four. The Hart Foundation had André tangled in the ropes and the duo went to work on Francis as they both eliminated him. André would go to work on the Foundation as he grabbed the Anvil by the beard, threw him against the ropes, and delivered a boot that sent him out of the ring. Bret tried to climb to the top rope, but André was there to grab him and he gorilla press slammed Bret to the outside to take the win. 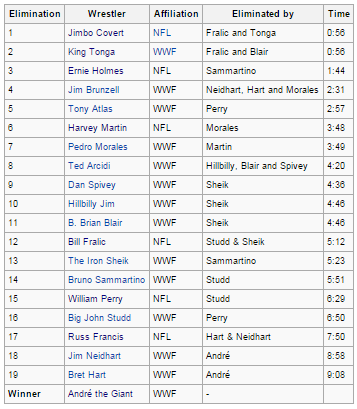