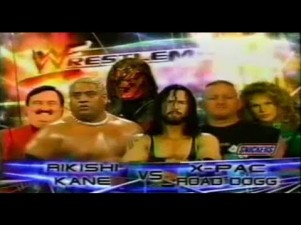 Going into today’s choice for the Countdown To  WrestleMania 33, I figured since we already covered Sam Fatu, Rodney Anoa’i (Yokozuna), and The Rock (Dwayne Johnson) of the world famous Anoa’i family, we might as well keep the train rolling with another member of the family in Solofa Fatu Jr. better known to fans as Rikishi (the father of Jimmy and Jey Uso). The match we are checking out with him was his tag match that he had with Kane at WrestleMania 2000 (a.k.a. WrestleMania 16) as they took on D-Generation X members Road Dogg and X-Pac. The main storyline heading into this one was that Kane had a beef with X-Pac and Tori, who basically broke the big red machine’s heart. When the match started, Kane was distracted by Tori who was running away from Paul Bearer leaving Rikishi all alone in the ring with both members of DX, but X-Pac would leave the ring to help Tori who was in a chokehold by Kane. It didn’t matter much because they were making short work of DX as Rikishi was giving Road Dogg the stinkface and he would’ve given it to Tori too if it wasn’t for X-Pac saving her. 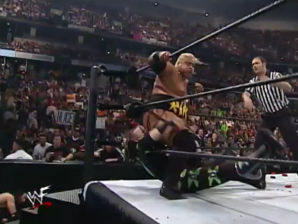 DX looked as if they were done with the match as thy started to make their way to the back, but Kane and Rikishi were going to allow that to happen. As soon as Rikishi entered the ring, X-Pac caught him a pinning heel kick that stunned the big man. He then delivered some educated feet to Rikishi and topped it all off with a bronco buster. Road Dogg would keep it going with some rights and lefts and a shake, rattle, and knee drop, but he couldn’t get the pinfall. As soon as X-Pac came back into the ring, the momentum changed with a simple pop up cutter. Rikishi was then able to make the tag to the big red machine who just began to clean house with both members of DX. After Paul Bearer threw Tori into the ring, Kane looked like he was going to choke slam her, but instead he threw her into the corner where Rikishi would deliver the stinkface. Then the camera shows us Kane delivering a tombstone to X-Pac. And that was all she wrote as Kane and Rikishi left with the win. Hey, don’t forget to like our page on Facebook at Facebook.com/MRXPUNCHOUT and follow us on Twitter too. 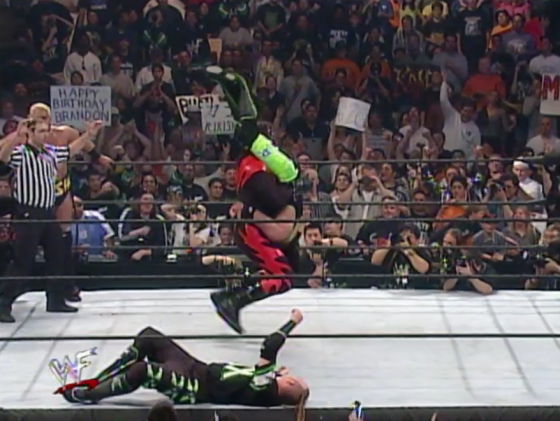 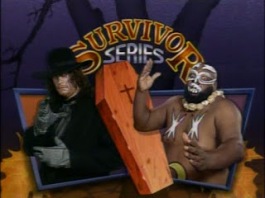 We here at Mr. X’s Punch Out feel that is necessary for the whole month of February to do what the rest of the country is doing and that is to celebrate black history month all month long. That means we are going to feature some of the best African American athletes to ever step foot into the squared circle. For today, we are checking out a match with the Ugandan giant Kamala (James Harris) when he reluctantly stepped foot into the ring with The Undertaker at WWE Survivor Series 1992 at the Richfield Coliseum in Richfield, Ohio for a casket match. As soon as The Undertaker’s music hit and the site of Paul Bearer wheeling the casket down immediately made Kamala scared to the point that he actually tried to runaway from the ring. There was no way in hell (no pun intended) that Kamala was going to be near the casket or the deadman even despite Kim Chee’s pleas. 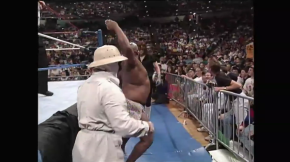 As soon as the bell rang, Kamala exited the ring and began running around hoping The Undertaker wouldn’t chase him. As soon as he went back in the ring, he began nailing the deadman with big chops to the head, chest, and back of him. However none of it phased the deadman and he began hitting him with chops of his own and even skinned the cat. He was in firm control of the match until Kamala clotheslined him out and he was distracted by Chee and Wippleman. As he grabbed the two, Kamala came from behind and took advantage of it. After some big chops, scoop slams, and some splashes on top of the Undertaker, it looked like he might have been done, but the power of the urn made him rise to his feet. The Undertaker would pick up the urn and hit Kamala over the head with it. After pinning him successfully, all he had to do was throw him in the coffin and close it shut which he did. It’s not the best match in the world, but I believe it introduced us to the coolest gimmick match ever. 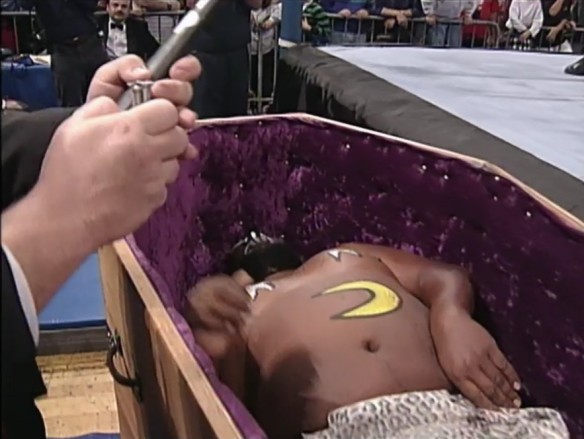