We are doing something a little different for the month of May because it’s no holds barred month here on Mr. X’s Punch Out. That is right, we are checking out all sorts of matches that deal with their being no rules whether it be a street fight, steel cage match, anything goes, last man standing, etc. Yesterday afternoon, I attended a show by Beyond Wrestling that was phenomenal and it featured a favorite of mine in David Starr and a new favorite in “Bad Boy” Joey Janela each in their own respective matches. I purchased a DVD from them called Beyond Wrestling presents Paying Paul which was taped at the Electric Haze in Worcester, MA back on January 29, 2016. The event featured an anything goes match that pinned David Starr against Joey Janela with the very attractive Penelope Ford in his corner. There was obviously some disdain between the two because as soon as the bell rang fists were flying and making their mark. At one point, David was looking to be in control of the match when Penelope got involved by jumping on him. David would slam her off of him, but when he tried to make her look at “IT”, she bit it which allowed Joey back into the match.

Joey would go quick to the outside to introduce a steel chair into the match which is essentially our first no holds barred item of the match. Unfortunately for Joey, after he was delivering a whopping to David, he threw himself against the ropes, but when he came back he was slammed by Starr right on top of the chair which was not folded by the way. David would exit the ring to grab a tiny table as the crowd put it, but he spent too much time setting it up because when he went to slam Joey into it, Joey reversed it and DDT’d him right on the warped chair. You could see right away that David was busted open from the DDT and Joey just began working on with some punches right to the head. Joey sensing that he was in control decided to climb the ropes for a senton, but when he did it, David was smart and he put his knees right up for Joey to land on. David then would go out of the ring and he would grab skewers (that is not a typo) and as he entered the ring, he dazed at Janela with eyes of vengeance or at least that he was going to enjoy this. 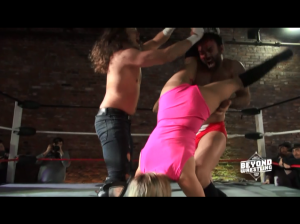 Unfortunately, Penelope got in the way with a huge distraction, but when he went to hit her with the skewers, she matrixed and then put him in a head scissors. That allowed Janela enough time to regroup again and nail Starr with a superkick, but he didn’t let go of the skewers. She tried some acrobatic moves, was caught by David, and skewered in the head for her troubles. David would try to set her up for a tombstone, but Janela saved her by skewering his head to which he followed it up with a tombstone of his own. He didn’t get the pinfall, but you had to wonder what else were these two going to do to each other. Joey was being brutal as he repeatedly stabbed him in the head again with the rest of the skewers to the point that you could see the damage that was being done. Then in a very torturous effort, Joey grabbed Kosher salt and he started to pour it all over David’s head putting the Jewish Cannon in a lot of agony. David was literally screaming as Joey poured the whole entire box over him.

David was in a daze or at least it looked that way as he was gazing out into the crowd as he climbed through the ropes to the ring apron. Joey thought that he would take advantage of the situation by charging at him for what might have been a spear, but David countered with a DDT through the ropes and on to the ring apron. David went on a rampage as he hit Janela with a Canadian Destroyer and despite Janela’s attempts to squirm out of it, he was powerbombed into the tiny table. David unfortunately couldn’t get the pinfall as Janela kicked out at two. David would exit the ring where Beyond officials looked very concerned for his well being, but he was in search of a chair. David would then climb back into the ring where he would set up a broken half of the table. Unfortunately for him after he set up Janela up top, Janela hit him with a death valley driver right through the tiny half of the table. Janela would then go in search of items to which he discovered a chair, but he wasted too much doing so. When he went to deliver a brain buster on top of the chair, David reversed it and hit one of his own.

The match was bordering on sick and perverse, but the crowd was absolutely loving it and both men were feeding off of it. There was something deep inside David that said that he wanted to punish Janela so he grabbed multiple cinder-blocks and threw them into the ring. Janela would take advantage of the time it took by hitting a falcon arrow and then after setting up one cinder-block on Starr, he followed it with a double foot stomp crushing the chest of Starr. Things got a little out of hand as soon as Janela began suffocating Starr with a Target bag, but despite that he was able to get the blackheart buster on Janela. He would proceed to smash against the brick wall that close to ringside and he followed it up with a German suplex on top of the cinder-blocks. That was all it took as David covered him for the 1-2-3 and the win. It was truly an insane match that I don’t recommend anyone doing on their own. David Starr regained his WXW Shotgun Championship from the Bad Boy. This is an example of some of the matches we are talking about here that you can expect all month long. Hey, don’t forget to like our page on Facebook at Facebook.com/MRXPUNCHOUT and while you are it why don’t you follow us on Twitter too.