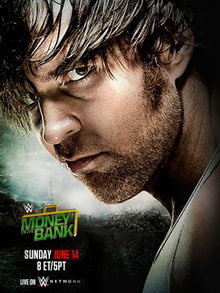 I first want to start this article by giving my heartfelt condolences to the family of the legendary Dusty Rhodes. He was a true American Icon in the days of NWA (National Wrestling Alliance), WCW, and even his brief stint in the WWE. He surely will be missed, but the show must go on. Tonight is the WWE’s annual pay per view Money In The Bank where a bunch of superstars will have a chance to grab a briefcase that contains a contract that is essentially the opportunity of a lifetime. Just ask all of the guys who have cashed in successfully. Dolph Ziggler, Randy Orton, Neville, Roman Reigns, Kofi Kingston, Sheamus, and Kane will all be competing for that chance. It’ll be interesting to see who they give the briefcase to because the match could any way. The WWE title of course is on the line as Seth Rollins once again defends his title against the lunatic fringe Dean Ambrose. I am hoping that they make the right decision as far as that match is concerned. Ryback defends his IC Title for the first time on a PPV as he takes on The Big Show and I warn you that this match could be a stinker. The match I am also looking forward to is the rematch between Kevin Owens and John Cena. This could be a potential match of the night once again. Check out my predictions below:

Roman Reigns wins the Money In The Bank Ladder Match