It is not too often that a WWE pay per view gets so much hype (more than Mojo Rawley) and fails harder than Zack Ryder. That was my thought regarding last nights more boring than Corbin PPV SummerSlam 2017. Last night, the WWE had a chance to start building their future with future stars like Baron Corbin, Rusev, and Shinsuke Nakamura, but they did the exact opposite. They certainly buried Rusev who lost in minutes after a simple RKO ended the match in ten seconds. They did that to Baron Corbin who had already lost the MITB briefcase on the previous Smackdown Live and then you have him lose cleanly to a guy who quite frankly didn’t need the win even though it was Cena’s first win at Summerslam since 2010. I was pleased to see that the WWE finally put the Smackdown Women’s title around the waist of someone who deserves it in Natalya (her first title in six years). I was rather upset that they put the Raw Women’s Championship around the waste of a superstar who just isn’t boss enough to hold it considering she ignores whatever fans she has left. One thing though is for certain and that is if you want to view SummerSlam skip all the matches and just watch AJ Styles vs Kevin Owens, Seth Rollins & Dean Ambrose vs Cesaro & Sheamus, and watch the Fatal Four Match because those matches saved the night from being a total disaster. 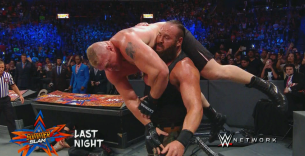 I do however have a piece of advice for the WWE, if you want losses from Bray Wyatt to mean anything then you have to let him win some times otherwise what are you doing with a guy who started out the year WWE Champion? You see I am really starting to think that it may be time for Vince McMahon to start handing down the reigns to others like the proven Triple H who has turned NXT into a dynamite show that delivers every single time. Can you imagine a WWE that is run by that mastermind? I know I could and I think I am ready to see it happen very soon otherwise we are going to be force fed crap result sand unworthy champions. The fatal four way match delivered in every way and it just felt like a big match main event which is what you want. I am just waiting to see if the WWE books Brock Lesnar vs Braun Strowman because that needs to happen like now. Is anyone going to called up from NXT tonight on Monday Night Raw? We can only wait and see. As far as my predictions, I went 5-8 in this PPV and I am happy with it because it just proves my point and some of the people I wanted to win did. To see the final results, click here to go to wikipedia.